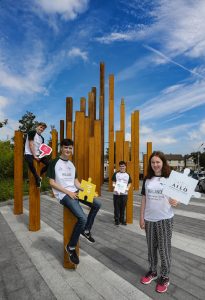 25 March 2019, Ireland: Four secondary school students from across the island of Ireland have been selected to test their language decoding skills against the world’s best at the International Linguistics Olympiad in Yongin, South Korea 29th July – 2nd August. The students, from Cork, Belfast, Dublin and Monaghan, came from an initial line up of 4000 students.  The four students were selected from the National Final of the All Ireland Linguistics Olympiad (AILO) which was recently held at Dublin City University. Run by ADAPT, a SFI research centre, the contest challenges secondary school students to apply logic and reasoning skills to solve complex puzzles in unfamiliar languages.

The All Ireland Linguistics Olympiad (AILO) challenges students to use their lateral thinking skills to solve puzzles in languages from all over the globe. Students must analyse the data they are given to work out the ‘rules’ of this new language. These transferable skills are very important in other subjects such as Maths, Coding and learning new languages.

AILO helps students to develop a powerful blend of problem-solving expertise and language competency, which are vital skills in today’s global economy.

Laura Cosgrave from Midleton College Cork, who is the AILO National Champion, is looking forward to pitting her wits against winners of other National Linguistics Olympiads from around the world in Yongin. She said: “My experience in AILO has allowed me to stretch my mind by solving fascinating, challenging problems and I’ve thoroughly enjoyed it. I am really excited to represent Ireland in South Korea.” Laura was also on the Irish Maths Olympiad team this year and earned an honourable mention.

Joining Laura on the team are Keelan James Daye of Sandford Park School, Ranelagh, Dublin, Flynn Ryan from Rathmore Grammar School, Belfast and Páidí Walsh from Ballybay Community College, Monaghan. The week in Korea includes a tough six-hour individual round, a three-hour team round and a fun schedule of cultural activities.

The team will be accompanied by team leaders Prof Harold Somers and Dr Cara Greene of ADAPT who have been helping the team train for the step up to international level. Dr Greene said, “The students who have qualified to represent Ireland are talented problem-solvers who will hold their own in South Korea. We are looking forward to competing against over 50 teams from 37 countries from all over the World.” The team has been doing regular online training and are at a training camp in ADAPT at Dublin City University currently prior to travelling to Korea.

AILO is run by the ADAPT Centre, a research centre that is revolutionising how digital content is adapted, personalised and delivered for the needs of global users.  ADAPT brings together more than 200 researchers at Trinity College Dublin, Dublin City University, University College Dublin, and Technological University Dublin as well as industry leaders in global digital content.  ADAPT if funded by Science Foundation Ireland and co-funded by the European Regional Development Fund.

The results of the International Linguistics Olympiad will be announced on Friday 2nd August. Sample puzzles from Irish Olympiad can be downloaded at https://ailo.adaptcentre.ie/puzzles/.